BROTHERS TOGETHER IN A BAND?! Every music fan knows of the classic stories of friction between brothers in bands, the Davies brothers in the Kinks and the Gallagher’s in Oasis being the most well known. But, there are plenty of less well known stories about brothers who get on perfectly well and make great music. Two such bands are here together on this seven inch record…

ARCHIE AND THE BUNKERS formed in Cleveland, Ohio, in 2013, the high schoolers play a raw garage-punk sound, honed 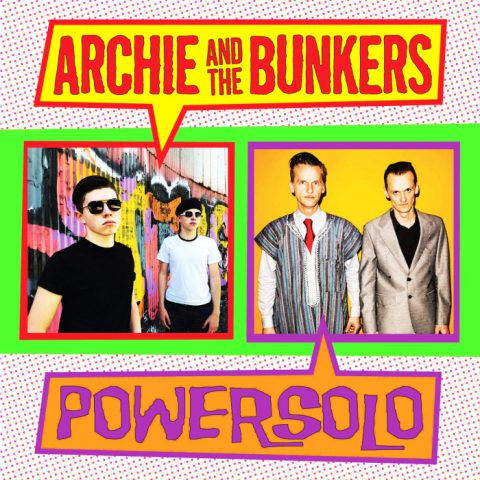 in their parents basement, that draws heavily from their diverse musical influences, ranging from jazz organ greats like Jimmy Smith, and Richard ‘Groove’ Holmes, to punk icons Dead Boys, The Stooges, The Screamers, The Damned, and more. Audiences across Europe have now seen them attack their songs with a frenetic energy that whips the audience into a frenzy. The unique growl of 17 year old Cullen’s whirring, overdriven organ and the driving beat of fifteen-year-old Emmett’s four-piece drum kit leave gig-goers in shock at the sonic assault levied by a group made up of just two boys. As a local reviewer wrote, they “sometimes draw initial attention from a crowd because of their tender years. But their ages belie the talent and powerhouse show they put on every time they hit a stage.”

POWERSOLO are two tremolo-loving chicken-scratch rail-thin guitarists, Kim Kix and the Atomic Child, who hail from the Danish town of Aarhus and conjure up the trash-rock psychobilly legacy of Hasil Adkins, the Cramps, and Southern Culture on the Skids, delivering a string of catchy tunes with crazy lyrical hooks that could have been one hit wonder seven-inchers back in the 1950s, ’60s or even the ’70s. They are the type of songs that could be found on the Las Vegas Grind and Nuggets compilations, music you can dance to, prance to, rock and roll (in the biblical sense) to, and get into some serious trouble to, celebrating a time when music had a sense of fun, sex and danger to it.

That kind of fun yet dangerous rock and roll is still out there of course. Right here, right now. These two bands are the real sound of rock and roll today. Two pairs of wild rock and roll creatures from the future living in the past and hailing the present. It’s happening all over the world, out of sight and out of mind of the talent-less talent show hordes, who look at potential careers first and the real meaning of music second. But this is the real thing. This is what it is all about.

Order Powersolo/Archie and the Bunkers

Beauty in Chaos – The Delicate Balance of All Things ft. Wayne Hussey

The Cretins – Haven’t Got A Clue